Clean Energy Fuels Corp. CLNE -2.69% , a major distributor of natural gas made from waste, found a way to boost its earnings by millions of dollars, virtually overnight.

All it had to do was switch the main biofuel it supplies to power cars and trucks inCalifornia—currently a type of natural gas produced with methane emissions from garbage—to a chemically identical gas produced from the manure of cows.

California’s clean-fuels grading system gives cow-poop gas a much better score—and much higher subsidies—than landfill gas. So that simple substitution could net CleanEnergy an additional $70 million in earnings before interest, taxes, depreciation and amortization by 2026, the company estimates.

Together with European energy giants BPPLC and TotalEnergies SE,Clean Energy is pouring hundreds of millions of dollars into gas production on dairy farms to milk that advantage. A host of developers, financiers and carbon-conscious corporations, fromChevron Corp.to Amazon.com Inc.,AMZN -1.33% are looking to buy or produce the fuel as well.

“It is like magic,” said Andrew Littlefair, Clean Energy’s president and chief executive, of the projected earnings boost.

The surging interest in dairy renewable natural gas, as it is called, shows how incentive scan spur action to address the emissions linked to climate change—and sometimes unintended consequences as well. Until a few years ago, the gas, which is interchangeable with conventional natural gas and can replace dirtier fuels like diesel, was a niche product that was too expensive to make commercially.

Now, California’s generous subsidies have prompted what some observers are dubbing a manure gold rush. One developer said he showed up at a dairy only to discover that the farmer had gotten more than 10 pitches for business tie-ups already. Others said competition for business has gotten so heated that some developers are promising to pay farmers a fixed amount per cow—a risky setup if the price of the California credits plummets.

Driving the boom is California’s Low-Carbon Fuel Standard. The standard requires companies that sell transportation fuels in the state to lower their products’ carbon intensity—the carbon dioxide emitted during manufacture, distribution and consumption. Companies that exceed the carbon-intensity maximums have to buy offset credits, each of which represents a metric ton of emissions. Those with low-scoring fuels generate credits, whose price goes up and down depending on demand.

The lowest carbon-intensity scores go to fuels that keep warming gases out of the air—particularly methane, a greenhouse gas that can be 84 times more potent in trapping heat than carbon dioxide, according to the Intergovernmental Panel on Climate Change, the scientific group that helps the United Nations evaluate the state of research on the issue.

Other waste sources such as landfills produce methane, too. But California already requires landfills to curb methane emissions while farms don’t have to, and thus they emit more. So capturing the methane from decomposing manure at dairies to make truck fuel cuts net emissions a lot, and reaps some of the best scores of all.

U.S. regulators haven’t generally imposed controls on methane emissions from livestock, since they are tough to implement and politically sensitive.

Its latest project to go online is the 1,500-cow Rib-Arrow Dairy in central California, where manure is now flushed from the floor of the stalls into a covered lagoon, called a digester, so the methane can be collected for processing rather than released into the air.That raw biogas, which is around 60% methane and the remainder mostly carbon dioxide, is piped to a central facility that collects gas from a cluster of dairies in the area and purifies it for injection into the local utility’s pipeline.

David Ribeiro, a third-generation co-owner of Rib-Arrow, said he had been approached by digester salesmen before, but that adding the gas sales to the environmental benefits finally made everything economically feasible: “We’re like, ‘Wow, this makes sense.’”

There are 116 such facilities currently operating in the U.S.—more than half of which went online last year—and another 121 planned or in construction, according to the Coalition for Renewable Natural Gas, a nonprofit that promotes gas made from waste. Analysts say thousands more dairies could support such plants, which can reduce foul odors in addition to capturing emissions.

The market is likely to remain small compared with the U.S.’s overall appetite for natural gas in homes, businesses and transport. Even in an optimistic scenario, biogas from manure would supply only around 3% of today’s demand by 2040, according to a 2019study commissioned by the American Gas Foundation.

Still, money is pouring in from big companies looking to lower their carbon footprints quickly—as well as entrepreneurs smelling a business opportunity. Clean Energy said it is working on more than a billion dollars worth of deals through its dairy-gas joint ventures with BP and Total, and that it hopes to channel more than $2 billion in investment by2026.

California-based Chevron has committed around $500 million to develop renewable natural-gas supply, starting with dairies. A Chevron investor presentation in September showed plans for a national network of as many as “190,000 milking cow equivalents” and forecast double-digit returns. Amazon has inked a deal with Clean Energy to buy biogas for its massive trucking fleet; it declined to comment.

At a California Bioenergy plant, methane is separated from carbon dioxide before it is injected into a local utility’s pipeline.

The entire separation process happens over the course of a minute.

More than half of California’s methane is released from dairy and livestock manure, and by cow burps. The state has vowed to lower greenhouse gas emissions by 40% compared with 1990 levels by 2030, and it is focusing on methane reductions in particular. It is also targeting a 20% reduction in the carbon intensity of its transportation fuel relative to2010, and has so far managed to cut it by more than 7%.

“From our perspective, the program is working to drive private investment” to accomplish the state’s environmental goals, said Matthew Botill, the division chief atCalifornia’s Air Resources Board who oversees the state’s low-carbon fuel standard and other climate change programs.

Oregon and the Canadian province of British Columbia are implementing similar fuel standards, and a number of other states are considering them, too. The federal government issues its own, less-lucrative, subsidies for low-carbon fuels.

California’s aggressive incentive system is producing some odd results. One dairy that was already using digesters to collect methane and produce electricity from its manure—the 35,000-cow Threemile Canyon Farms in Oregon—got a relatively high carbon-intensity score of negative 189 when it shifted to making gas for California, since it had fewer emissions to reduce.

“The manure management practices on the farm were so good…that they were penalized a bit,” said Ben Vitale, CEO of Resilient Infrastructure Group, which owns Threemile’s gas plant.

Financiers at Cresta Fund Management, a Texas-based private-equity fund that has two renewable natural gas producers in its portfolio, said they have seen an increasing number of entrepreneurs with little experience in the area trying to raise money for dairy-gas projects.

“We had some authors pitch us,” said John Skrinar, Cresta’s director of sustainable investments. “The reality is, it’s a lot more complicated than just show up, put a swimming pool in the ground, shovel a bunch of cow manure into it, and make a fortune.”

At Rib-Arrow Dairy, water used in the methane-capture process is stored in this lagoon. The water will eventually be used for cow feed and fertilizer.

Write to Phred Dvorak at phred.dvorak@wsj.com 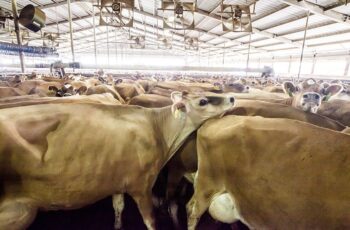 Harnessing the Worth of Water